Encounters With The Law Chapter 1 – Dealing Drugs…I Don’t Think So!

If you listened to the Ross Bentley podcast with yours truly, you probably heard me talk about the roads in southeast Ohio. I’ve been to Tail of the Dragon, Appalachian Mountains, Rocky Mountains, as well as all California has to offer. For spirited and twisty road driving, nothing compares. It’s a quiet area with little traffic and very well maintained roads.  This area is truly the best kept secret.

We used these roads for tuning MRC and steering primarily for Sport but also some Tour. We found them somewhat by accident.  We were headed to Harrisonville, VA where we had been performing most of our high-spirited tuning.  One day we decided to take back roads, and BOOM, we stumbled on the roads in southeastern Ohio. After that trip, we never went back to Harrisonville. 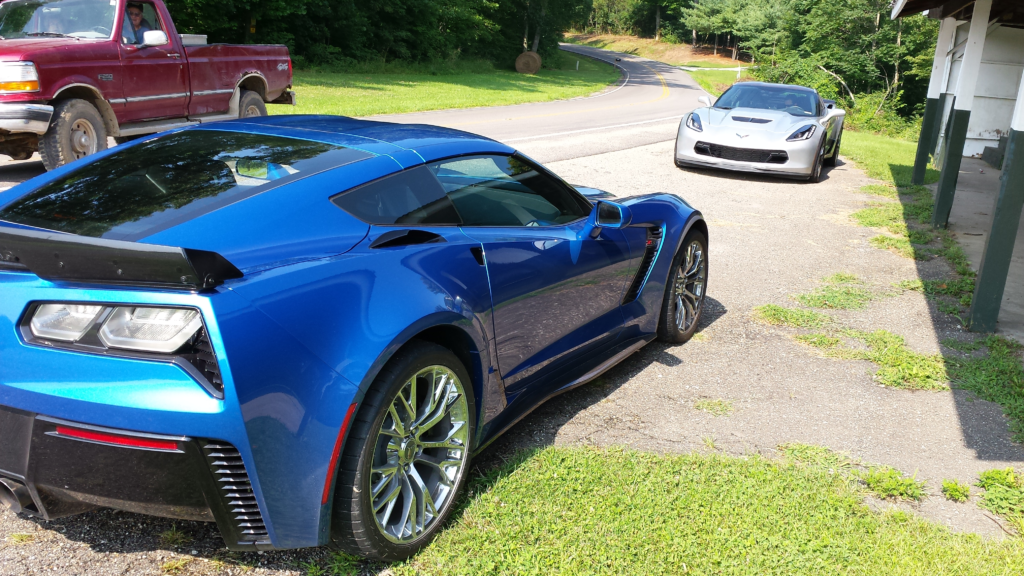 Let me digress a bit and give a brief description on how we tune during these trips. It’s 2014 and the Z06 has been revealed but not in production yet.  Most of the trips there were 2 of us, each in a car. In this case, we were tuning the Z06’s. Scott, the steering engineer would be calibrating steering in one of the cars, myself in the other calibrating MRC and steering.  Sometime during the day, or when we got back in the evening, we’d swap all our equipment and tune the other car.

About 50 times during the day, we’d stop, driver side door to driver side door.  This was typically when I wanted a steering change.  I would explain to Scott what I was looking for, he would make the appropriate changes, hand me the OBD2 cable, I’d plug it into my car, he’d flash it, and away we’d go.  If I had an MRC change I wanted to put in his car, I’d do the same. 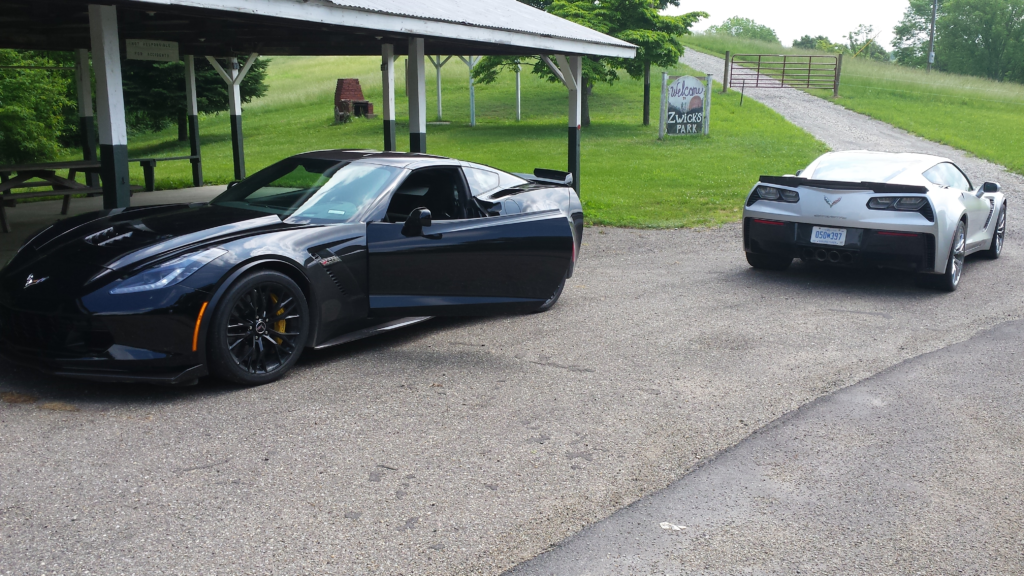 A lot of times we’d use the same section of road for consistency but tried to move on before we upset the locals.  Nonetheless, when we remained on a certain section of road for a period of time, two Z06’s parked door to door were something the local folks were not used to seeing.

You can imagine the locals wondering what is going on when suddenly a variety new Corvettes appeared for days and weeks on end.  Well, we found out. Most of the them were incredible friendly, except………..

One day, we spent a lot of time making changes at a general store in the middle of nowhere.  I had just left Scott after a door to door “meeting”.  A little old lady walked out from the store, leaned in the passenger side window and asked Scott if he had a sense of humor.  He replied, “I’d like to think so”.  She said “good, because those old farts that just left the store think you two are dealing drugs and they’re calling the law”. Which caused an eruption of laughter among the two of them. 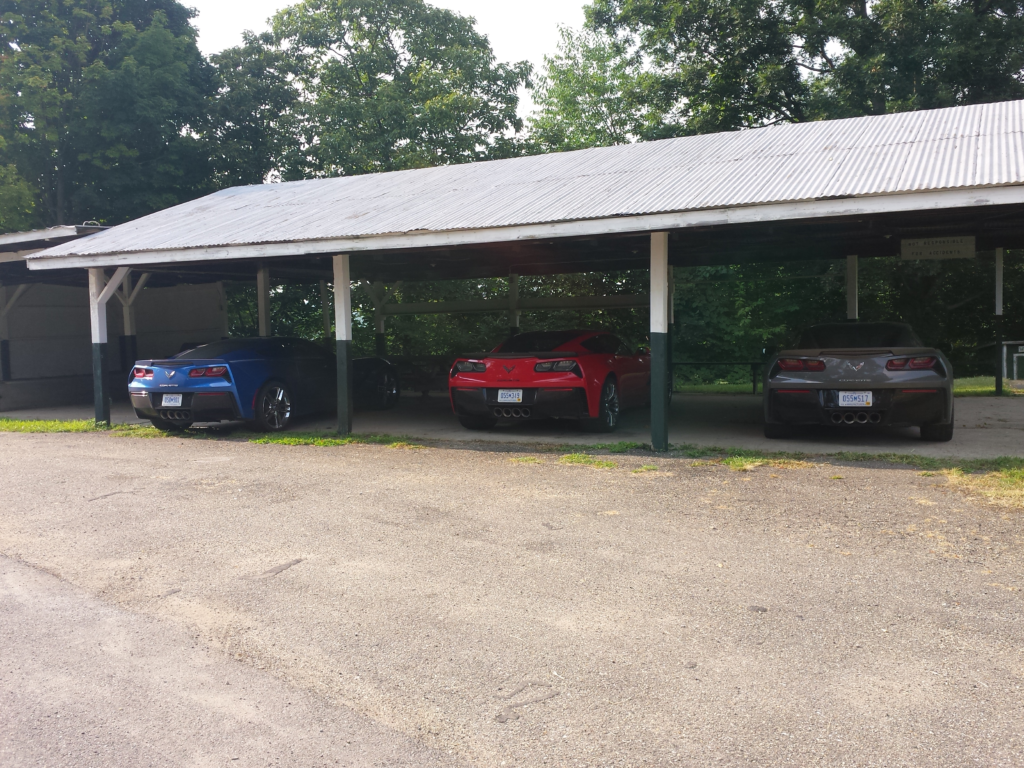 This store was high on a small mountain.  When I returned, Scott told me the story, we had another good laugh, and headed down to Woodsfield, OH for some lunch.  Now, up to this point we had been using these roads for weeks and never saw an officer of the law. So, when we encountered a Sheriffs car heading up the mountain, you can imagine how we felt.

We headed to Woodsfield, Ohio. Despite images of Burt Reynolds and a Trans Am in my mind, we drove like boy scouts.  We suspect that’s where the sheriff came from as it was the closest town. However, we never encountered flashing lights coming up from behind us.  But, as soon as we hit the city limits, there was another sheriff waiting for us and immediately pulled us over.  Now I have the utmost respect for law officers, and always treated them with complete respect, but this one had quite an attitude.

He walked up to the Z06, hand on gun, and asked me to keep my hands visible and get out of the car.  Scott was already on the sidewalk. I asked him why he stopped us, he replied that there were a lot of complaints by the locals about our driving.  Knowing we’ve been profiled as Corvette driving drug dealers, I replied, “Bull shit you guys think we’re dealing drugs”.  He told me, that’s right and we are waiting for the Lieutenant to arrive. I told him exactly what we were doing, showed him the manufactures plates and told him to look inside of the cars at our tuning equipment. 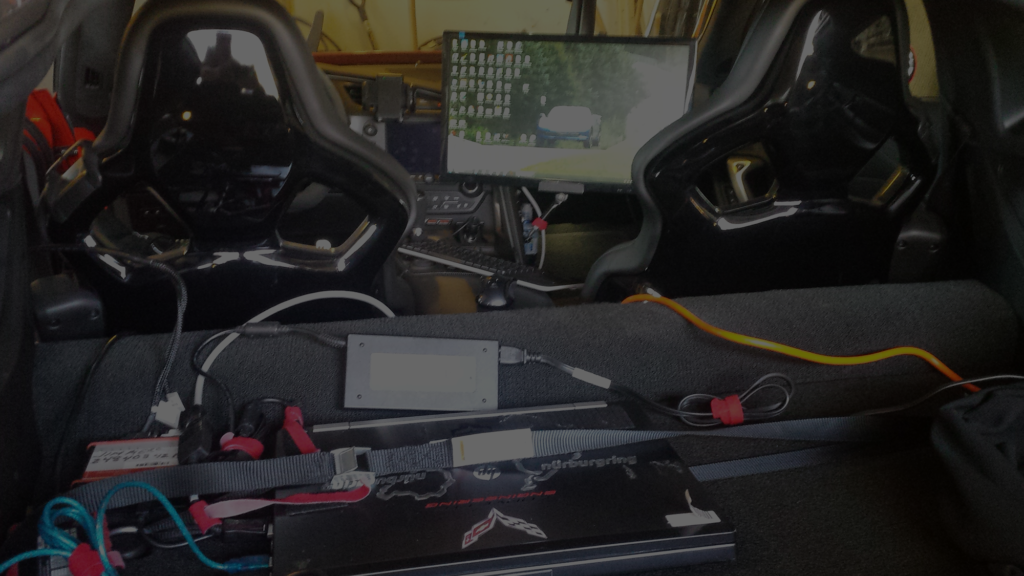 Shortly after, the Sheriffs we passed earlier showed up, it was the Lieutenant. Compared to us, this guy was young. He walked up and asked which one of you two is from Goodrich, Michigan.  I told him I was. He said he used to live in Davison, Michigan (about 10 miles away). I asked him what year he graduated from Davison High School.  As fate would have it, he was friends with one of my best friends’ son.

We were parked in a residential area on the main street heading into town. As we were conversing, a man came out from his house and shouted, “Hey, those are the new Z06’s”.  Suddenly there were about 20 to 30 people around the cars.  We started talking to the locals, answering questions.  At that point, the officers realized that we were 2 nerd engineers and the only drugs we had were Advil.  The first officer lightened up, the transformation was amazing, he was a nice guy. Suddenly he had a lot of questions about the cars.  As I reflect, perhaps if I were in his shoes and all I knew is what the old farts told me about their suspicions about drug dealers, my attitude might have been the same as his, bygones.

All was good.  The lieutenant had two requests, first, is there any way we could make the exhausts quiet, no problem, stealth mode.  The second, when we were going to use the roads to let him know so if he got a call, he would know it was us.  I agreed but knew better.  I thought inviting the law up to the areas we were driving, probably not the best idea. We spent about an hour talking to the locals and the officers about the cars and moved on.

Just another day in the life of a Corvette Ride and Handling Engineer.  More encounters with the law yet to come….

Below are one of the areas we stopped for changes, a pavilion right along the road, not exactly sure exactly what its purpose was, but a good place to make changes. Also, a look at the tuning set up, an office on the road…

Also, one of the roads OH555 had a lot of quick elevation changes.  One snuck up in me, check out the video…..FYI, Zero Damage to the car.

Last year I purchased a C6 Grand Sport convertible.  I bought the car in Texas and drove it back to Michigan.  In the fall of 2018, Jim asked if he could upgrade my car to get my thoughts. The transformation is unbelievable! The pleasure of driving the car in either tour or sport can’t be understated.  On my drive back from Texas I never put it in sport.  Now I do almost all my driving in sport. If I just want a nice cruising car, tour is perfect.  In both tour and sport, the car just glides over the bumps that used to beat me up bad.  Also, I noticed how much better the steering is, which surprised me.  Now I can’t imagine driving the car without the new programs. Read More Testimonials ->

After a total of 10 hours of seat time.  In both tour and sport. Mix of freeway 55-90mph with hours rural backroad and small-town slow driving. I like this new cal so much. Both tour and sport absorb the bumps very very nicely and are still stable and composed.  Everyone will notice a considerable difference. Read More Testimonials ->

Jim come to my house to put the calibration in my 2010 ZR1. When I bought the car, I had to drive it back from Texas to Michigan. 18 hours on the road was a bit of a headache. The car was a blast except for hitting potholes, railroad tracks, and impacts in general. Since the calibration, my car drives and handles 100x better. The impacts seem to be non-existent. Going over railroad tracks are a breeze and the sport mode is a true sport mode now. I’m amazed every time I take out my car. Love every bit of my new calibration. Read More Testimonials ->

The ride and handling for both modes is a dramatic improvement. As soon as I left Jim’s house in tour mode, I instantly felt a more “modern” feel to the car. Very comfortable now and yet more the handling is more responsive. I do not feel the hard rebound over larger bumps. It doesn’t pound my dash when I go over railroad tracks like it used to. I feel that there is more steering response at lower speeds and of course at high speeds.

When I put it into sport mode, I feel a good difference. Now I feel a nice transition between tour to sport. Before the upgrade, I never put it in sport unless I was showing my friends how harsh it was. I am driving it in sport mode more often now. The ride is so much better as well as the cornering.  I want to say it feels like a new stab bars were installed. It’s that much more balanced through the corners. Read More Testimonials ->

Just wanted to let you know how happy I am with the driving improvement. Drove over 250 miles yesterday. I am no expert but would say the car feels much more stable, planted, kind of hard to describe but driving over rough pavement sections has a sense that the suspension is working much more refined. These are really nice cars and your program just adds to the experience. Read More Testimonials ->

On a regular basis, I’m on roads with rough, heavily-worn asphalt, pot holes, sections of cracked and broken-up pavement and fragmented road edges. For around-town driving, I have MR set in the “Tour” mode and with Jim’s MR cal the car gets over all those crappy road surfaces with a bit more comfortable ride. On roads which are in better condition, but with bumps and heaves, the ride seems more controlled.

When hammering my ZO6 through the twisties in the mountains near my home–State Route 33 from Oaji, California over to where joins with SR166 is a favorite of mine–I put MR in “Sport” mode. With the Mero-calibrated “Sport”, when driving over high-frequency, low-amplitude chatter bumps, ripples, cracked pavement and stuff like that, I don’t feel those disturbances quite as much. Also, Sport, with a Mero MR cal, seems more appropriately-damped in that kind of driving than did Sport with the stock MR cal. Lastly, the car’s response to steering input, especially in an autocross movement or an emergency evasive maneuver seems different. The best way I can describe this situation is that steering is more “crisp”–for lack of a better word.

In short, I was impressed with Jim Mero’s C6 MagnaRide calibration, not only because of the improvements discussed above, but because his stuff is for “real world” driving and not specific to track use. Read More Testimonials ->

Introductory Priced At Only $325! 100% Satisfaction Guaranteed

About the Author: admin

Get Email Notifications When Jim Posts a New Story
Subscribe To The Blog Now!

Stay up to date with Jim's MRC suspension upgrades
& behind the scenes stories of Corvette development
No Thanks!

Powered by Convert Plus™